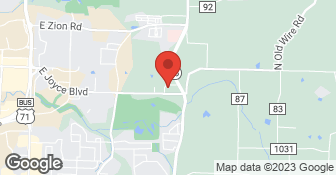 If you are the least overweight, don't waste your time.  He only has time for people who are in great shape.

DESCRIPTION OF WORK
I was referred to Blankenship back in 1998 for a ruptured disc.  Upon viewing my MRI he stated that he would not in any uncertain terms do surgery on a person my weight while backing out of the room from our 2 minute consultation.  He had the nurse give me a cortisone injection.

I called his PAC she said If I would not do therapy and would not let him put shots in my spine I could not  get the surgery. I told her the Oxycodone made me sick she said she could perscribe Morphine I am Allergic to it. She could Perscribe Tylenol 3 with Codeine I am allergic. Everything on my Allergy list was what she wanted to perscribe. Made her mad She said I had to take the Oxycodone for 2...

DESCRIPTION OF WORK
I was Not Very Impressed By this physician. Iwent to him with Herniated Discs and Severe Pain. And My appointment was at 9 a.m. he finally came in the room at 10:15. I had heard him out in the Hall way talking to his Nurses and Visiting and His P/A/C/ came in the room first she examined me before he ever came in the room. Ordered 5 xrays. I told her I had brought my MRI and Xrays from my doctor. But she wanted their Xrays So I got back to the room she left Dr came in almost 20 miutes later. He examined me Ordered me to take 6 weeks of physical therapy I told him I did not have the money for alot of expensive therapy and tests. I get $813 for Disability and Do not get Medicaid or Medicare. I have insureance through my Husbands Job. But refused to run up big bills on the Insurance. Oh he said they would work with me. The physical therapy guy came in and said It would only be $15dollars charge for me each time. I got my Bill he charged the insurance company $400 dollars for 2 visits and my part is $50 for the 2 visits. And the Doctor Himself Charged the Insurance $650 for 10 minutes my part is $75 It is crazy. Then his PAC wants me to have a NON Steroid Injection in my pinched Nerve and 4 Cortizone Shots in my spinal Column. I said NO I have had the Cortizone shots before and they made me Sick. Tough I was told I had to take them If not he would refuse my surgery.

He is very concerned about his patients and works very hard to make sure that you are feeling better.

DESCRIPTION OF WORK
I had an appointment with Dr. Blankenship to have some X-Rays taken.