Roofing
Gutters
Exterior Painting
Chimney Repair
Drywall
Roof Cleaning
Interior Painting
Siding
Licensing
Insured
All statements concerning insurance, licenses, and bonds are informational only, and are self-reported. Since insurance, licenses and bonds can expire and can be cancelled, homeowners should always check such information for themselves. To find more licensing information for your state, visit our Find Licensing Requirements page.
Business Details 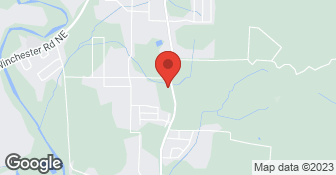 We install new roofs and we also do repairs. There is never a job too big or too small, we do it all. We also do gutters and fascia boards. Give us a call today for a free estimate. We are a local company not a fly by out of towner. We hope to make you another happy customer, if it's not us you choose to go with please use a local company not an out of towner. Thanks for your time and Have a Blessed Day....

With 15+ years of professional pressure washing experience, I am here to clean your home, your driveway, mobile home, heavy equipment anything that needs cleaning and give you the BEST curb appeal possible.

We guarantee your satisfaction and we won’t leave until the job is done right. We pride ourselves on the quality work we provide, while delivering great customer service! Check out our services offered and call or click to schedule a free estimate today!

The roofing and decking work was great. The cleanup was fine. I requested that they drive their truck onto boards in the lawn to prevent making ruts in the soft lawn, which they did, even though I had to provide several of the boards. The only reason the quality was not an "A" was the vinyl siding that they removed and reattached. The siding job was effective but pretty ugly and not terribly profe...

Randal showed up on time, measured the roof, and provided an quote for both a 20 year and a 30 year shingle.  We went with the 30 year shingle and the workers showed up about midday on the scheduled day and removed/replaced one field of the roof per day, for each of four days (the mornings were still on the cold side and the later start allowed to dew to dry).  The workers were careful not to remo...

Called budget roofing for an estimate and he came out on the 6th gave me a quote on a repair to my leaking chimney area of my roof. I called and agreed to the price. The work was down 2 days later. He tore out around chimney, removed corner molding, and shingles as needed. He installed water & ice shield underlayment, installed new flashing, and re-roofed the area. He would have provided a close m...

DESCRIPTION OF WORK
Roof repairing around chimney was leaking.

Half the roof had hail damage which the insurance company paid for and I paid out of pocket for the other half of the roof.  After it is said and done I feel that I over paid for their services and there where some quality issue that have come up after the job has been completed.  Since the roof installation I have had Budget Roofing give me some quotes on some other jobs and the where a lot highe...

DESCRIPTION OF WORK
They installed a new roof on my house.

Budget roofing did a good job of installing a new roof, fixed several leaks and installed 2 skylights.  I had this roof done in 1999 and that contractor screwed things up so bad that by 2008 I was repairing leaks.  Budget is reputable and does a good job.  It's been over a year and there are still no leaks.