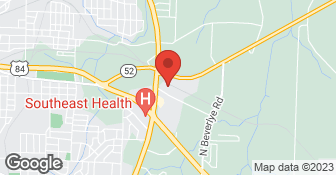 Our business is dedicated to the loving care of your pets. We treat your pets as if they were our own. We hav a cage free environment where the pets are allowed to roam around freely and interact with each other and with us. There is not a loss of love and attention to your pets at our facility....

Have used them for about two years with a standing appointment every four weeks. They have done an excellent job. My dogs (the girls) are excited to go and exhausted from playing with other pets when I pick them up. The owners and staff have always been very professional and polite but most importantly, my girls like them. They are well groomed: bathed, blown dried, brushed out, nails trimmed, and...

DESCRIPTION OF WORK
The cost is for two dogs, a rough coat collie at 70 lbs and rough coat sheltieT 30 lbs. They are well groomed: bathed, blown dried, brushed out, nails trimmed, and hygiene hair trimmed. I have not been disappointed yet.

The owner was so great. I needed a new groomer because the one I had been using moved. My dog can be difficult and we have gone through several groomers. When I called Dog Daze, the owner told me they were not taking new customers. When I ask

DESCRIPTION OF WORK
Groomed my dog.

They do a good job. They sit them and bathe them and all that stuff. We will be using them again in anther two weeks.

DESCRIPTION OF WORK
We use Dog Daze Dog Grooming for animal grooming. I have two dogs, including a Labradoodle and a Golden Retriever.

We do not offer boarding care.