Auto Transmission
Auto Radiators
Electrical
Auto Service
Licensing
Bonded
Insured
All statements concerning insurance, licenses, and bonds are informational only, and are self-reported. Since insurance, licenses and bonds can expire and can be cancelled, homeowners should always check such information for themselves. To find more licensing information for your state, visit our Find Licensing Requirements page.
Business Details 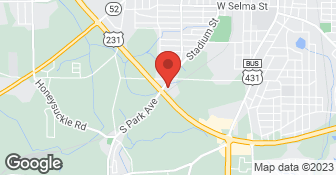 Serving south Alabama since 1957. We specialize in automatic and standard transmission as well as the area's leader in advance automotive computer electronic diagnostics and repair. Our million dollar plus parts inventory means that we have the correct part when needed.We have transmission parts from 1948 to present including transmission, engine, ABS,traction control and virtually any electronic computer for your vehicle....

DM Services provides home maintenance, home repairs, basic plumbing and electrical needs, home automation, and more! Servicing the entire Wiregrass area with experience dating back to the mid 90's, I promise to provide exceptional quality service with a smile! Check out our services offered and call Don Morgan, or click to schedule a free estimate today!

Providing quality service since 2009! We have Licensed and Certified Plumbers and Electricians that can handle any job no matter how large or small. We also specialize in flooring. We can also cut down trees that may cause damage to power lines. Anything you need, give us a call!

Company going out of business very little to no help

DESCRIPTION OF WORK
Excellent service with a caring attitude at reasonable prices.

Will not go back to them.

I was robbed of valuable time and money dealing with this business! I'll never get either back.

DESCRIPTION OF WORK
Brought my car in because the light came on and my mechanic said it needed a flush. Owner had me sign a blank form, my wife came back to pickup the car because he didn't have time to look at it. He drove it and couldn't find anything wrong. He then charged my wife $125.00 and said if she brings it back he would give her a credit toward the flush. He wrote that customer authorizes repair for $125.00. We brought the car back next day, when I called he said the repair was $3500.00, I knew I could get a transmission put in for around $800.00 but still didn't think anything was wrong. He then said it was $1500.00 to put it back or $450.00 to come get it in boxes. I asked him who authorized this charge he said said my wife (who would never do this) then he proceeded to tell my that because I questioned him he was now charging $600.00 because his time was valuable. He also said I should drive if I can't afford a Lincoln, he also told me he spent more on his wife's tires and told me he was "a have and doen't like dealing with have nots". I found it ironic that he also told Rhonda Pasibe the same thing who is a military wife married to Lt. Colonel Pasibe who is deployed overseas fighting for his rights which do NOT include the right to rip people off.I did go to court and lost apparently my wife signed another blank for which was conveniently filled out in court which gave the judge no choice because it was signed.If you look at this persons track record in Enterprise and now in Dothan then take your car to him you will get ripped off. This isn't a miss communication but the way he does business. You have seen people like him on 60 minutes. He is a liar and will steal your money. He is a little man who thinks he now can push people around and so far he has although I did hear he gave the Pasibe's their money back and allowed them to take their car to a reputable repair shop, don't count on it with your car. PS I did get my transmission replaced for 1/2 of what I paid him to tear it apart!

This person is a mentally challenged individually. He filed suit in court and lost. He was given 10 days to pay this bill by the judge and finally paid on the eleventh day. True people somtimes live beyond their means, this is such a person.
F

DESCRIPTION OF WORK
Daughter's transmission was removed for possible re-build or repairs. Once removed, $6,000 + was quoted. Unable to afford that price, it was decided that the trasnisission would be reinstalled. Tne qute for that was over $800.00. It was decided to have the transmissionplaced in the car and we would have it towed home. First my credit caed was presented for payment. (a Visa or a Master Card). Were told that the card would be charged an extra 20% for its use. That was declined and a check was issued. (the bank was within two blocks away from this company). The company refused to release the car, claiming that the check was not good. I called the bank to find that no one had tried to cash this check. We were then told that we would have to bring cash before the car would be released. At this point I turned the matter over to my attorny. The car was release the next day. BEWARE OF THE COMPANY!